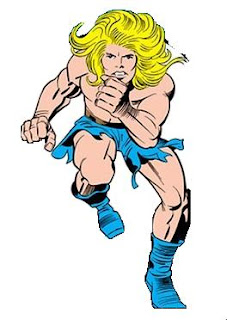 I was on my break from work, sitting outside smoking and reading a comic book, when I was struck by a thought that I immediately decided to share with the readers of this blog.  That's what blogs are for, after all; to allow people to share any idle notion that pops into their empty heads with the entire world.  Al Gore must be so proud.
Anyway, the comic I was reading was Grimjack #16.  I was re-reading this issue because I finally managed to lay my hands on a copy of #17, which contains the second part of the story begun in this issue.  On page two, a face drawn by Tim Truman struck me as particularly Kirby-esque.  In fact, the character bore a very strong resemblance to Kamandi, the Last Boy on Earth.
This observation, in turn, led me to think that a Tim Truman drawn Kamandi comic would be really cool.  In fact, considering his work with various alien races in Grimjack and Hawkworld, including species of evolved hawks and lizards, I can't think of any artist better suited to render Kamandi's post-apocalyptic world of intelligent, talking apes, bears, tigers, and other animals (other than Jack Kirby himself, of course.)
Who would write this dream comic?  Well, Truman himself would do fine, but I would really like to see his frequent collaborator, and one of my favorite writers, John Ostrander take a crack at the Last Boy On Earth.
Posted by Ray "!!" Tomczak at 3:30 PM