That Was The Blog That Was: A Gutter Talk Year In Review

To begin with, let me say that 2012 was not a good year for this blog.  I managed a mere 58 posts during the previous 52 weeks. (Compare that to October 2010, when I managed nearly that number in just one month) I shall try to do better in the new 12 month cycle, but I'm making no promises.  Still, there were some happenings in the world of comics that managed to break through my lethargy and compel me to go to the keyboard and share my special brand of ill-considered analysis with the world at large, or at least my couple of dozen regular  readers.  Below are recaps of some of the more interesting developments of the 366 days just gone by. 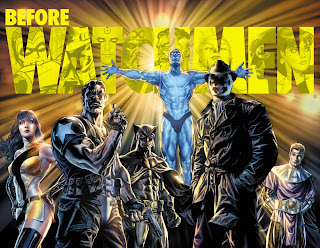 The big controversy of the year  was the debate over creators' rights inspired by DC's decision to publish Before Watchmen, a series of prequels to Alan Moore and Dave Gibbons' 1985 classic, despite Moore's objections, though Gibbons did give it his somewhat half-hearted blessing.  I wrote at length about this issue (here, here, here, here, here, and again here, although that last post is really more about my all-time favorite Superman story than it is about Before Watchmen) during the spring and early summer, and linked to Moore himself opining about it in a BBC radio interview, so there's really not much more to say about it now.
The major business story of the year, at least amongst the rank and file of geek culture, was, of course, the October announcement of the Walt Disney Company, also owners of industry leading comics publisher Marvel, aquiring Lucasfilm and the rights to the Star Wars franchise, accompanied by the promise of a new installment in the film series to come in 2015.  You can read my first impressions of the news here.
DC's Public Relations shop showed more creativity and energy than is on display in many of the comics themselves as they managed to drum up a fair amount of unwarranted mainstream media hype over minor developments in a couple of those comics.  First came the announcement that one of the company's "iconic" characters, eventually revealed to be original Green Lantern Alan Scott (leading to much speculation about what exactly DC thinks "iconic" actually means), was to revealed to be gay in the 2nd issue of Earth 2. Even more mystifying was how the publisher's flaks somehow got respectable news outlets to cover Clark Kent quitting his job as a reporter for the Daily Planet in a fairly undramatic scene from Superman #13.  At least in the case of Earth 2, there was a decent story behind all the hype, though not so much with the Superman tale.

Meanwhile, it appears that the writing is on the wall for DC's two decade old Vertigo imprint.  First came the announcement that the imprint's longest running title, Hellblazer, will come to an end with its 300th issue in February with the book's lead character, John Constantine, reappearing the following month in a new series set in the mainstream New 52 DC Universe.  Coming quickly of this news was word of Vertigo founding editor Karen Berger's decision to step down as head of the imprint as of March.  Furthermore, I have heard from a semi-reliable source that Vertigo is no longer entertaining proposals for new projects and has canceled some others already commissioned.  Given all these developments, it seems that one of the big stories in next year's year in review post will be the news of the demise of DC's venerable mature readers line. 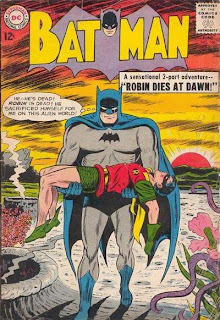 While I lamented the passing of science fiction legend Ray Bradbury in June, one death that I failed to note was that of Golden Age veteran Sheldon Moldoff, who died on Superman's birthday, February 29.  This is sort of fitting, given that he was the last surviving contributor to the first Action Comics #1, the issue that introduced the Man of Steel and jumpstarted the entire comics industry.  However, he was, perhaps ironically, best known as a ghost artist, illustrating numerous Batman stories appearing under the mass-produced signature of Batman co-creator Bob Kane. Among the classic tales of the Caped Crusader which Moldoff delineated were "The First Batman" from Detective Comics #235, in which the discovery of an old Halloween costume worn by Bruce Wayne's father ultimately leads to the capture of Lew Moxon, the mobster who hired Joe Chill to kill Thomas Wayne for daring to testify against him, and Batman #156's "Robin Dies At Dawn", one of the most awesomely bizarre Batman stories ever, which has Batman deciding to hang up his cape and cowl after he is nearly killed by bank robbers wearing gorilla suits because he's hallucinating as a result of having participated in a top secret government experiment. Seriously, bank robbers dressed as gorillas would be enough to make this story a classic, but this story isn't even about them.  They're just one random element of weirdness in a stew of mind-boggling madness.  As an added bonus, there's even an appearance by Ace, the Bat-Hound.
That's pretty much what stuck in my mind as I looked back over the comics news of the past year.  Let's now look forward to the surprises that 2013 has in store for us, shall we?
Posted by Ray "!!" Tomczak at 6:28 PM