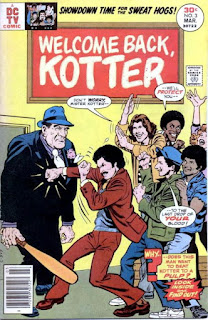 Its funny the things that stick in your mind, isn't it?
A while back, I did a piece on the career of Tony Isabella, and in it I mentioned that he was responsible for what I still to this day think is one of the funniest lines I've ever read in a comic book in Welcome Back, Kotter #3.  I went on to quote that joke. However, since at the time I did not own a copy of the comic in question and it had been over thirty years since I'd read it, I had to rely on my memory.
Well, as I mentioned yesterday, I just acquired another copy of Kotter #3 at Gem City Comic Con this past weekend.  So I decided to go back to that earlier post and check how accurately I'd actually remembered the passage.  It turns out I did pretty well.
I had the line as "There are a million stories in the Naked City.  There are almost as many in Brooklyn, but here we keep our clothes on.  It makes it easier to conceal weapons that way," which is pretty much verbatim.  I only left out two words.  The last part actually reads "It makes it a lot (italics mine, added for emphasis) easier to conceal weapons that way."
Not bad for a middle aged guy, huh?
Now if I could only remember where I set down my coffee cup.
Posted by Ray "!!" Tomczak at 7:03 PM