The Pope of Comics 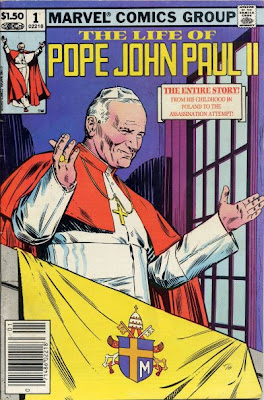 Congratulations to my Catholic readers--if there are any who haven't been put off by my occasional references, when appropriate to the subject at hand, to my unashamed atheism and liberal politics.  Most Catholics I know are staunch Republicans and refused to even vote for one of their own for President back in 2004 because he belonged to the wrong party.  Not to mention that more than a few of them actually belief in God.
Sorry, got sidetracked again.  Happens a lot. Maybe I should hire myself an editor.  Anyway, as I was about to say, there's a new pope as of two days ago.  This is the fourth time during my lifetime, including twice in 1978 alone, that the cardinals of the Catholic church have gathered to select a new leader for their little cult. (If I had any Catholic readers left, they're gone now)  The first two times, I actually sort of cared.  Though, in retrospect, I don't think I ever really believed, I was raised as a Catholic and attended mass regularly until the mid-1980's when I went off to college and got away from parental influence. Plus, I did think that it was kind of cool that the second pope chosen in '78 was one of my people--a Pole.
The history of the papacy during the past four decades has been one of precedents and historic firsts.  The election of John Paul I to replace the late Paul VI (I remember reading a satirical headline in National Lampoon that declared, "John Paul Elected Pope; George, Ringo Miffed") was pretty much business as usual for the church, until JP I, in turn, died a mere 33 days later.  Though the reign of Pope John Paul I was by no means the shortest in history, it is, according to Wikipedia, in the top ten.  John Paul I's tenure of little more than a month was followed by the election of the first non-Italian  pope in more than something like four hundred years.
I suppose you could call it ironic that one of the shortest papacies was followed by the second longest papal reign in Catholic history.  John Paul II served for over twenty-six years.
After JP II's death in 2005, he was followed by Benedict XVI, a German with a somewhat questionable past.  (He's in his 80's and from Germany...you do the math.)  After an eight year reign marked by all sorts of controversies, Benedict broke centuries of precedent by becoming the first Pontiff to leave the office standing up for almost six hundred years.
The new pope, Francis I of Argentina, continues the tradition of breaking with tradition by being the first from the "New World" of the Americas, and the first from the Jesuit order.
What the bloody hell, you may be screaming at your computer screen by this point, does this poorly researched treatise on recent religious history have to do with comics, which is what this damned blog is supposed to be about?  Well, John Paul II, during his quarter century plus reign, became one of the most popular popes in history.  Not only was he beloved by Catholics, but he made quite an impression on non-Catholics as well.  He also ended up making a few appearances in comic books over the years, including two that recounted the story of his life. 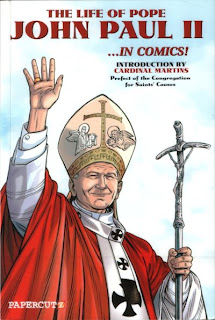 The first of those was published in 1982 by Marvel as part of the short-lived line of hagiographic comics produced in co-operation with the Catholic church that also included the Mother Theresa comic I wrote about last year.  (...and, relevant to the new pope, I believe there was also a book about St. Francis of Assissi, after whom the new pontiff renamed himself)  I have not actually read this comic, but the cover blurb promises "The Entire Story! From his childhood in Poland to the assassination attempt!"  The Life of Pope John Paul II was written by Steven Grant.  Grant's other credits from the decade include the 1986 Punisher mini-series, among other, more typical mainstream comics fare.  (The Pope and the Punisher...Now there's a team-up I would've loved to see.  I mean, if Frank Castle can meet Archie Andrews, then why not?
The second sequential retelling of John Paul II's life, The Life of Pope John Paul II...in Comics!, was published in 2006.  As it came out after John Paul II's death, I imagine the latter volume offers a more complete picture of the pontiff's life.
In addition to those two biographies, the Comic Book Data Base lists a handful of other appearances by John Paul II in some perhaps surprising titles.  These include Vertigo's Kid Eternity, DC's Wonder Woman, and Marvel's Thor.  I don't know the nature of his appearance in Thor, but its interesting to imagine one of the foremost representative of Christianity meeting one of those "other gods" inveighed against in the First Commandment.
On a completely different note, and totally unrelated to anything I've written here so far, there's one thing I've been wondering as I mentally composed this post.  Why do popes take a new name when they get elected?  Why couldn't I, if I became pope, just be Pope Raymond I?
Posted by Ray "!!" Tomczak at 3:37 PM