"To Absent Friends, Lost Loves,
Old Gods and the Season of Mists,
and may each and every one of us
always give the Devil his due."

Comics blogger Tim Callahan, fresh from his year-plus "Great Alan Moore Re-Read", has embarked on a re-read of Neil Gaiman's Sandman.  I've been playing along at home, re-reading the series along with Callahan and I thought I'd offer up some of my own thoughts and theories about the series and perhaps other comics that are in some way related to the series, if only tangentially.
I've decided to begin with the series' third major storyline "Season of Mists," which Callahan writes about here.  If you've not read the story, you may want to do so before reading either this post or Callahan's piece, as discussion of the ending figures in both. 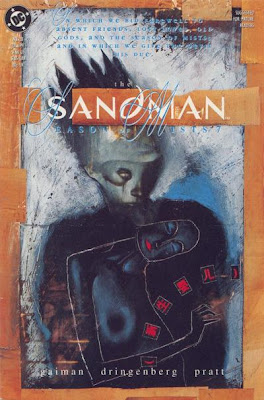 Now, if you haven't read the story and are still reading this, heedless of my above warning, I will offer a brief synopsis of the plot.  Morpheus, also known as Dream, the Prince of Stories, Lord of the Dreaming and the series' eponymous Sandman, attends a meeting of his family, The Endless, who all embody various big concepts and whose names all begin with the letter D, where he is shamed by his siblings Desire and Death for having, centuries earlier and as related in the prologue to "The Doll's House", condemned a former lover to spend eternity in Hell after she dared reject him.  He therefore decides to journey to the realm infernal to free her. This is complicated by the fact that on an earlier visit to Hell, he'd managed to piss off Lucifer, the fallen angel who rules that nether land, in  the course of retrieving his ceremonial helmut, which had come into the possession of a minor demon, causing Lucifer to swear the Dream Lord's destruction.  Prepared for a battle from which he may not return, Morpheus is surprised to find when arrives at the gates of Hell that Lucifer has no intention of fighting him.  Instead, the Prince of Darkness has recently decided to abdicate the throne of Hell and is in the process of evicting all of the demons and the damned before locking the gates and deserting his post forever.  As a final gesture, and perhaps as a way of fulfilling his vow to destroy the Dream King, Lucifer gifts Morpheus with the key to Hell.  The dark realm now belongs to Morpheus and the rest of the story is about him deciding what to do with it, as representives from various pantheons and mythical realms descend upon the dreaming to make their case for why Hell should be turned over to them.
As a result of Hell's being emptied out, on Earth, the dead are returning and Dream's sister Death has her hands full.  Gaiman shows the effects of this catastrophe in an issue illustrated by Matt Wagner that tells the tale of two deceased students at an English boarding school where other dead former students and masters have returned.
The toast quoted at the top of this post, recited as Morpheus shares a drink in dreams with an old friend, is my favorite bit of writing in "Seasons of Mists" and perhaps in the entire series. That may have something to do with the fact that it comes from my favorite character in the series, Hob Gadling, of whom I shall perhaps write more at a later date. That's not to say, however, that its the only good thing, or even the best thing, about the story.  No, the story offers much to love, despite its somewhat weak, Deus Ex Machina style ending, not the least of which is the art of Kelley Jones, who illustrates the majority of the tale. Jones' art, with its highly stylized and often grossly exaggerated anatomy, may not be everyone's cup of tea, but I've always been a fan, and I feel his style is perfectly suited to conveying the dark, brooding mood of the story.
Now, about the ending.  As Callahan observes, though the insight is by no means original to him as I noted it myself as I read the story prior to Callahan's posting, the conclusion of "Season of Mists" is, in the most literal sense of the term, a Deus Ex Machina.  God, speaking through the angels he had sent to observe the negotiations over the fate of Hell, ultimately declares that since he created Hell its His and He's taking it back and appointing the aforementioned angels to rule over it in His stead.  You realize that the Almighty could have done this at any time, which could have rendered the whole story meaningless.  However, the preceding issues leadng up to God's pronouncement are so well written, entertaining and compelling that the somewhat weak ending really doesn't bother me.  Besides, when you think about it, there's really no other way the story could have ended.  Furthermore, the events of "Season of Mists" are far from being meaningless, but are, as I discuss below, pivotal to the unfolding, over-arching story line of the series as a whole. 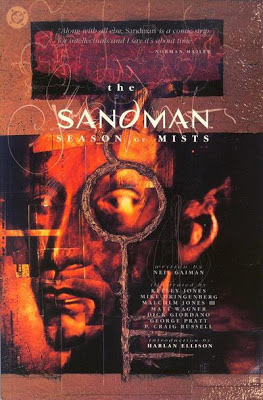 "Season of Mists" is where Sandman truly became Sandman as it would come to be beloved by devoted fans for a generation now. By this time, the series has found its footing and Gaiman has found his authentic authorial voice.  It is here also that the story of the series begins in earnest, as the first two story lines had mostly been by way of introducing the reader to the charactersof Morpheus, his associates and his world.  With this story, Gaiman begins presenting many of the concepts and characters which would prove key to the series' eventual denouement.  The reader is formally introduced to the Endless, Dream's family, all of whom, with the exception of youngest sister Delirium, had appeared briefly during the previous two stories.  We are also told that there is another member of the Endless, as yet unnamed and referred to only as "the prodigal", who abandoned the family and his realm and responsibilities at the last meeting of the Endless some three centuries prior.  This resonates with Lucifer's decision to leave Hell and sets up a theme that would be revisited many times over the course of the series.
In his analysis of the story, Callahan writes of giving the collected edition of the story as a gift to someone who'd never read comics, let alone Sandman, before.  While I would recommend starting from the beginning with Preludes and Nocturnes, if you must dive head first into the middle of the series, then "Season of Mists" is probably the best place to do it.  (Although my first exposure to Sandman was, if I'm remembering correctly, "A Game of You," but we'll talk more of that when I write about that story in an upcoming post.)
Posted by Ray "!!" Tomczak at 5:04 PM