Not With A Bang...Hellblazer: "Death and Cigarettes" Reviewed 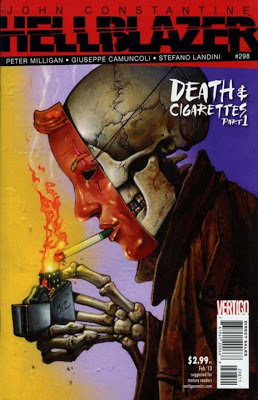 Prior to coming back to check out the final story line, it had been ten years since I'd bought an issue of Hellblazer.  Exactly ten years, as a matter of fact.  Excluding the final three issues, the most recent issue of Hellblazer in my possession is #180, cover dated March, 2003.  Thus, on my return to the world of John Constantine's London, I was struck right away at how much had changed in the time I'd been gone.  Several new and unfamiliar characters now populated the story.  The most notable of these was Epiphany, John Constantine's wife.
It seems kind of strange to find Constantine married, though its certainly not out of character.  He's had long term romances before, perhaps the most important being Kit during the Garth Ennis era, but they always seemed to end badly.  So it was a bit surprising to see him in  a somewhat stable and happy relationship.
Another one of the "new" characters, Angie Spatchcock, actually debuted during one of those last Mike Carey  written issues that I purchased a decade ago.  However, I'd completely forgotten that fact until I re-read those issues a couple of days ago.  She was a minor character in those issue,  but she seems to have become a major player in the series since that time and turns out to be critical to the conclusion of the series. 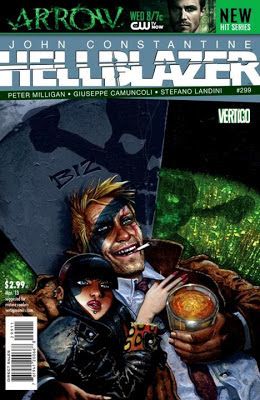 On the other hand, I also noticed how much hadn't changed.  John's old pal Chas was still hanging around, and Constantine himself was pretty much the same character as he had been since his days as a supporting player in Swamp Thing.  He may be somewhat older, but not a whole lot wiser.
Speaking of which, I had wondered if the series had continued to progress in "real time" as it had in the early years when John marked his 35th birthday in an early issue and turned 40 five years later in the first issue under the Vertigo imprint.  Sure enough, in the first part of the current storyline, he refers to having lived some "sixty odd years," which is about how old he should be.
Given that, the series couldn't have gone on forever.  Despite his efforts, including those in this story, to cheat death, Constantine is mortal.  Thus I suppose the 300th issue was as good a time as any to bring the series to a conclusion.
"Death and Cigarettes" begins as John has seen signs and portents telling him that he's going to die soon.  Thus, he makes plans to cheat the Fates and return from the dead, while others, including the aforementioned Fates, conspire to make sure he remains deceased.
The story unfolds as a pretty typical Hellblazer story, with John making his plans and scheming his schemes in an attempt to avoid the inevitable.  I enjoyed the story for the most part, but was ultimately somewhat disappointed by the final issue. 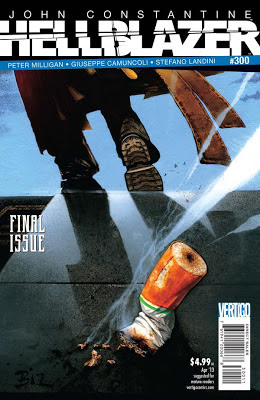 One thing that disappointed me is that there wasn't much of a farewell.  I was expecting, or at least hoping for, a text page containing some sort of message from the editor or writer Peter Milligan looking back on the history of the series and acknowledging its place in the history of comics, and the Vertigo line particularly, while thanking the past creators for their efforts and the readers for supporting the series for the past quarter century.  The closest thing we get to that is the final panel,  which works the names of everyone who has worked on the series into the artwork as writing on the labels of bottles in a pub.  It is, for this series, a somewhat fitting way of acknowledging these talented individuals, but I was hoping for more.
As for the story itself, my big problem is with the ending.  I'm not going to spoil it for you.  I don't really think I can.  After all, despite having read it twice now, I'm still not really sure what the hell happened.  The resolution of the storyline hinges on a story element introduced sometime during that decade that I wasn't reading the book.  Therefore, I'm confused as to where John ended up in the end.  Is it the afterlife...or is it Liverpool?  I can't say for sure.
Although, notwithstanding the confusing ending, I mostly enjoyed the story, ultimately it was a rather unsatisfying conclusion to twenty five years of Hellblazer.
Posted by Ray "!!" Tomczak at 5:31 PM