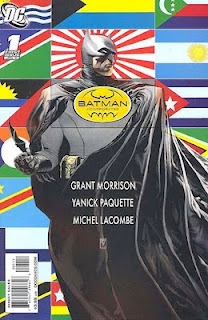 On the text page of Batman and the Outsiders #1, Mike W. Barr gushed about the chance he had been given "...to write a Batman book, beginning with #1." He asked the reader rhetorically, "Do you know how many writers there are who can say they've written a first issue of a Batman book?" When he wrote those words in 1983, it was indeed quite an exclusive club Barr had joined.  DC hadn't launched an ongoing Batman series with a new first issue since Batman #1 in 1940.  The mini-series was still a relatively new format and, hard as it might be for us to believe today, the Caped Crusader had been featured in only one up to that point, 1980's The Untold Legend of the Batman.
These days, however, with DC seemingly launching a new Batman mini-series or even ongoing series every week, the challenge would seem to be to name a writer who hasn't had a crack at a Batman first issue.  Grant Morrison alone has gotten three such opportunities, first with Batman and Robin, then Batman: The Return of Bruce Wayne and now Batman, Inc., which hit the stands this past Wednesday.
This is another book that gives me a feeling of deja vu.  Back in the 1980's, Batman's costume featured a yellow oval surrounding the bat symbol, Catwoman had mostly reformed and often fought crime along side the Dark Knight, the two were also occasionally romantically involved and she knew his secret identity.  In Batman, Inc. #1, the yellow oval is back, we see Catwoman and Batman working together then later hanging out together out of costume in a Tokyo hotel room, and, as the scene abruptly shifts, it is strongly implied that the two are about to have sex.
With nice art by Yanick Paquette and Michel Lacombe, lots of action, a bizarre and intriguing new villain, and a cliffhanger ending featuring a death trap reminiscent of the old Batman TV show, Batman, Inc. #1 is actually a really good comic.  I'd have no problem with it at all if it weren't a first issue.
First issues should, ideally, set up and explain the basic premise of the series.  This one just throws us right into the middle of the action without any preamble, which left me feeling a little lost.  Batman and Catwoman are in Tokyo because Batman wants to recruit a Japanese crimefighter called Mr. Unknown.  Recruit him for what? Obviously for Batman, Incorporated. But what IS Batman, Incorporated?  The story never tells us.  I suppose if I'd been more closely following every Batman comic published during the last few years, especially, I assume, those written by Morrison, I'd already know.  However, I haven't and a brief recap would have been appreciated. Hopefully, future issues will flesh out the concept a little more for new readers. The issue is at least good enough to make me want to come back and find out.
Posted by Ray "!!" Tomczak at 5:59 PM