In the same post where he reveals his choice for greatest DC Comics cover ever, J.M. DeMatteis also gives us his pick for the greatest Marvel cover.  I tried to come up with my own favorite Marvel cover, but nothing occurred to me.  I guess I don't really have one.
I do, however, have a favorite panel from a Marvel comic.  It's from Amazing Spider-Man #147, "The Tarantula Is A Very Deadly Beast!" written by Gerry Conway and drawn by Ross Andru, Mike Esposito and Dave Hunt, and its the most hilarious unintentionally (I presume) funny moment I've ever read in  a comic book. 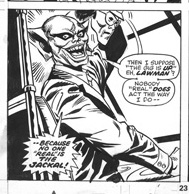 The story begins with the Tarantula escaping from prison with the aid of the Jackal, and proceeding to attack Spider-Man.  As the two battle across downtown Manhattan, eventually they end up fighting on a city bus.  The frightened passengers flee at the next stop, but the bus driver appears not to notice anything unusual going on.  Seemingly oblivious, he keeps admonishing the combatants to "Please move to the rear of the bus."  When the Jackal created clone of Spidey's dead girlfriend Gwen Stacey gets on the bus and the driver continues to act oddly, the web-slinger snaps. "You can't be real!," he shouts at the unflappable driver, "Nobody behaves like you do...Nobody!"
At this point, the driver removes his "bus driver" mask to reveal the mask of the Jackal, complete with its giant protruding ears.  That's not the funny part, of course.  After years of reading Batman comics, you learn not to think about it too much.  The hilarious part is  what  the Jackal says as he unmasks:

Cracks me up every time I read it.

Of course, when I first read that when I was ten years old, I didn't see the humor in it.  It was only when I came back to it years later as an adult that I  realized how funny it is.
Another thing that wasn't too funny to me is that the issue ended on a cliffhanger, but I missed the next issue at the local drugstore and it would be nearly twenty years before I found how Spidey survived being thrown off the Brooklyn Bridge by the Jackal and the Tarantula.  The next issue of Amazing Spider-Man that I would pick up was #153, so I knew he did survive, just not  the details of his escape.
By the way, I just noticed something as I've been typing this up.  What's the deal  with me and 147th issues? Just yesterday, I wrote about The Brave and the Bold #147, and a few months ago I spotlighted Justice League of America #147.  Coincidence?  Probably, but maybe I should consult my astrologer.
Posted by Ray "!!" Tomczak at 2:10 PM