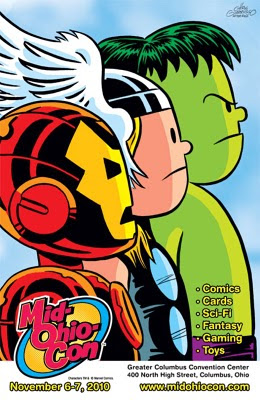 "I'm going downtown
And I'm gonna buy me some new shoes.
When there's nothin' to win,
You got nothin' to lose,
It ain't nothin' like a pair of brand new shoes.
Oh, yeah!"
---The Bus Boys, "New Shoes"
I'm actually pretty well fixed for shoes right now, but I am headed to downtown Columbus, Ohio this weekend and I'm gonna buy me some old comics.  The 30th annual Mid-Ohio Con is taking place tomorrow and Sunday at the Greater Columbus Convention Center.
It may not be as big as the San Diego Comicon (and from the reports I've read of what an overcrowded zoo that show has become in recent years, that's probably a good thing), but Mid-Ohio Con is the only major mainstream comics convention that I could walk to if I were so inclined.  Sure, it's a long walk from my neighborhood of Clintonville to Downtown, but I've done it before.  This weekend, though, I plan on taking a bus, as it is very cold here in Central Ohio land.
I'll probably only go tomorrow.  The last two years, I actually shared a table with other members of local cartoonists' group Sunday Comix, but this year I'm going mostly to expand my already voluminous comic book collection.  I'm sure I'll end up writing about at least a few of my aquisitions here on this blog.
I'm not really much of an autograph collector these days, but there are a few guests at the con I'd like to see, if only to say "hi" and tell them how much I've enjoyed their work over the years.  I do want to get another sketch from Art Baltazar.  This one will be for me.  The one I got two years ago was a Christmas gift for my niece Alison, who's a big fan of Tiny Titans.   However, even though this blog is not exclusively focused on Bronze Age comics, as you surf through it you'll realize that is where my interests primarily lie, so I honestly don't even recognize more than half the names on the con's guest list.  Among those that do ring a bell are Matt Wagner, Tony Isabella, Kurt Busiek, Chris Sprouse, Bob McLeod, Darryl Banks, Mark Texiera, Ethan Van Sciver, Michael Golden, Arvell Jones, Beau Smith, Barry Kitson and the legendary Herb Trimpe.
The weekend's festivities kick off tonight with a pre-con party at Packrat Comics.  You've got quite a legacy to live up to, Packrat. I'm referring to the Great Ogre Gatherings, the pre-Mid-Ohio Con parties hosted by the Laughing Ogre back when it was in the hands of original owners Gib Bickel, Rod Philips, and Darren Guarino.  Those were truly memorable, often moreso than the con itself.  I do hear that Packrat's shindig may include live music.  If that materializes, then Packrat wins.  That's something the GOG never had.
So, the party's only a couple of hours away and I need to get all cleaned up  and presentable for it.  I'll talk to you all in a couple of days.
Posted by Ray "!!" Tomczak at 4:05 PM