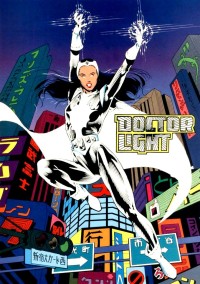 Welcome back for the second part of my look at the history of the four DC Comics characters who have been known as Dr. Light.  This retrospective was inspired by the following question posed by one of my readers in a comment on an earlier post:

Didn't Doctor Light die in Suicide Squad? I know comic book characters never STAY dead, but still... Also, I thought there was a female Doctor Light who used a similar-powered suit as a hero. She served in the Justice League for awhile. What happened to her?

In part one, I covered the Golden Age Dr. Light, an obscure foe of the first Dr. Mid-Nite, looked at the "second" Dr. Light, actually the fourth one to appear in comics, whose heroic career was cut short by a freak lab accident, and traced the career of Arthur Light, the most well known and longest lasting of the four Dr. Lights, from his earliest efforts to destroy the Justice League of America to his death and resurrection in the pages of Suicide Squad.  In short, after several hundred words, I'd managed only to answer the first part of the commenter's question.  In this installment, I will bring the bio of Arthur Light up to the present and review the career of the female Dr. Light.
If you haven't read that earlier opus, click here and do so while I take a few deep calming breaths so that I may attempt to write about Identity Crisis, one of the worst comics ever, without barking and foaming at the mouth.  Forgive me if I might get one or two details wrong in my summary of the story.  I'm writing about it from memory, since I really didn't want to read the damned thing again. 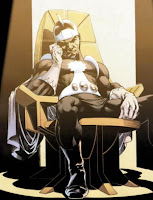 After Sue Dibny, wife of Ralph Dibny, the Elongated Man, is killed on her birthday just before she's about to announce to her husband that she's pregnant, Ralph and other Justice League members immediately suspect Dr. Light.  The reason why is revealed in a flashback in which several Leaguers return to their satellite headquarters to discover Light in the act of raping Sue, who had apparently been left alone on the satellite for some reason.   Realizing that Light is a serious threat not only to them but to their families and loved ones as well, the heroes decide to deal with that threat permanently.  Therefore, Zatanna performs what is essentially a magical lobotomy, erasing Light's knowledge of their identities and turning him into the inept, bumbling coward that he became in the 70s and 80s. In the present, meanwhile, Light somehow regains his memories, realizes what the League did to him and vows revenge.
After Identity Crisis, the newly bad-ass Dr. Light showed up several more times, confronting heroes such as Green Arrow and the "new" Dr. Light. Finally, the Spectre caught up to him and killed him by turning him into a candle and lighting him.  Arthur Light was last seen as an undead Black Lantern in the largely unimpressive yet still wildly popular crossover Blackest Night.
So, after going to such lengths in order to elevate Dr. Light to a first class villain, DC turns around and kills him off again? Seems like a big waste to me. Besides, they never got around to changing his ridiculous costume.  No matter how much you retcon him, its hard to take a guy who wears a fin on his head seriously.
Now let's turn back the clock to another "Crisis", namely Crisis On Infinite Earths.  The fourth Dr. Light is one of the few characters to debut during Crisis who is still kicking around the DC Universe a quarter of a century later.
In the second issue of Crisis On Infinite Earths, the Monitor declares to his aide Harbinger, "Lyla, my dear, get me the file on the new Dr. Light!  It is time for me to create her!"  Although with all that was going on in the Crisis, it wasn't until issue #4 that the Monitor got around to setting his plans for the new Dr. Light in motion.
Astronomer Dr. Kimiyo Hoshi is arrogant, abrasive and intolerant of those she considers her intellectual inferiors, including her own father.  In the face of impending armegeddon, she insists on studying the cosmic phenomon that is destroying the earth even as her colleagues flee to their homes to be with their families.  Due to the time and space distortions caused by the Crisis, Kimiyo is able to observe disturbances on the distant star Vega as they are occurring. She is shocked to see a strange beam emanating from the star headed straight for her. Seconds later, she disappears in an explosion of light, taken by the Monitor to be transformed into the new Dr. Light.   Unlike the previous Dr. Lights, her powers are internal, having been granted her by the Monitor, rather than residing in the costume. She is next seen, wearing a costume similar to that of the villainous Dr. Light, guarding one of the "cosmic tuning forks" that are the key to the Monitors plan to save the Multiverse.  She is convinced to join with the super-heroes of the five surviving Earths in traveling to the anti-matter universe to confront the Anti-Monitor.  After witnessing Supergirl sacrifice herself to save Superman, Kimiyo vows to change her ways and become a hero. 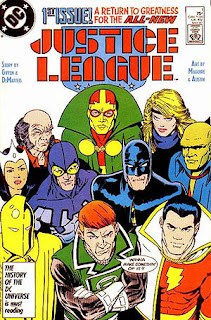 After the Crisis, she is next seen in Justice League #1 as the first hero recruited by Maxwell Lord in his attempt to control and manipulate the new League. Although she does not end up joining the team, she ends up serving as house physician at their Japanese embassy after the group gains United Nations sponsorship.  Dr. Light would join the team during "Breakdowns," Keith Giffen's final storyline, and stay on as a member of the League's European branch when Gerard Jones took over as solo writer of Justice League Europe.
Since the demise of that incarnation of the Justice League, she has shown up from time to time as a member of other groups including the Outsiders and the Doom Patrol.  She was apparently left powerless after a battle with Arthur Light, but has since somehow regained her powers.  Most recently, she once again hooked up with the Justice League.
That brings us pretty much up to date with the lives of the four Dr. Lights. Of course, in super-hero comics, nothing ever ends, so their story is far from over. Kimiyo Hoshi will continue to pop up around the DC Universe, and someday someone will probably bring Arthur Light back to life yet again.  Some future writer may even remember the Golden Age Dr. Light someday and revive him in some manner.   When that happens, you just might see a third installment of this series.
Posted by Ray "!!" Tomczak at 2:56 PM