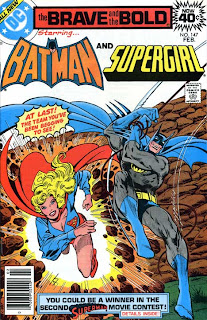 Coming near the end of writer Bob Haney's long tenure on The Brave and the Bold, issue #147 teams Batman and Supergirl in a story written not by Haney but by relative newcomer Cary Burkett.  I can only speculate as to why this issue is not written by Haney, however I do know that there were conflicts toward the end of Haney's run between the writer and new B&B editor Paul Levitz that would eventually force Haney off the book.  It may be that Levitz wanted a Supergirl team-up and Haney either refused to do it or didn't do it to Levitz's satisfaction.  If Haney did refuse, I'd speculate that it was because he had already planned the story that would appear just three issues later in #150 featuring Superman.  It does seem almost redundant to me to have team-ups with two so similar characters in so  short a span of time.
However, my purpose in writing about B&B #147 was not going to be to talk about how badly DC treated Bob Haney, but how badly DC treated Dr. Light in Brad Meltzer's awful Identity Crisis mini-series.  I saw another review of this issue on-line and, remembering that Light was the villain of the piece, decided to write a post about how the doctor wasn't always lame and how the revamp of the character in Meltzer's story was unnecessary, not to mention a really bad idea and  an equally bad story.
After rereading B&B 147's story, "Death-Scream From The Sky", I realized that I couldn't do it.  Oh, I still feel the same way I always have about Identity Crisis. It is and shall remain for all time one of the worst comics ever published.  However, I am now forced to admit that Dr. Light really was pretty lame.
In B&B #147, his scheme to blackmail Gotham with the threat of a laser attack from a hijacked satellite is pretty generic, having been tried by a host of other villains ranging from the Parasite to Kobra, and Batman barely breaks a sweat taking out him and his henchmen.  A couple of years earlier, in Teen Titans #44, Light tried to take revenge on the his old enemies in the Justice League of America  by defeating their sidekicks in the Titans, but ended up getting his ass handed to him by wannabe hanger-on Mal Duncan , an even lamer character than Light, wearing a second hand Guardian costume. 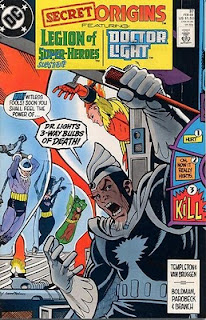 In these stories, the heroes, at least, take Light seriously.  Batman tells Supergirl that Light is "more deadly than a dozen rattlesnakes."  The writers, for their part, do their best to make Light a real menace, though they don't quite succeed.
By the 80's, things had changed. Dr. Light's inherent lameness was acknowledged and even embraced. In the Batman and the Outsiders/New Teen Titans team-up Marv Wolfman and Mike W. Barr portray Light as a craven, cringing coward.  His backstory in Secret Origins was played for laughs, paired in that issue with the origin of the even lamer  and far sillier Legion of Substitute Heroes, and John Ostrander used him mainly as a punchline in Suicide Squad.
As I've said before, there's really nothing wrong with having one or two easily defeated comic relief villains to provide the heroes a little breather between the real world-beaters.  Besides, the point I'd intended to make in this post is still a valid one.  If DC really had to make Dr. Light into a badass mofo, there had to be better ways to do it than a clumsy retcon that turned him into a brutal rapist and had Zatanna psychically violate him and the rest of the JLA as accomplices.
It just amazes me that DC actually approved this piece of crap instead of shouting "Are you freakin' crazy!?! We can't print this garbage!!!" and having security escort Meltzer out of the building. I, for one, prefer to pretend the whole mess never happened.  That would be a whole lot easier if nearly everything that's happened in nearly every DC title for the five years since didn't spring directly from it.
Still, I hope that someday DC will choose to just ignore Identity Crisis.  However, it seems far more likely that instead they'll eventually publish an even worse story to explain it away.  Now that's something to look forward to.
Posted by Ray "!!" Tomczak at 9:30 AM