"The Cape" Debuts Tonight On NBC 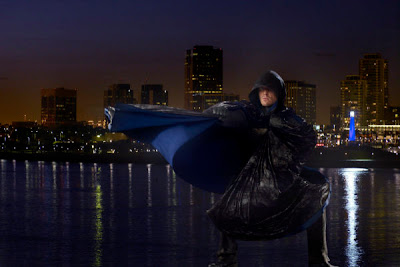 NBC launches its new super-hero drama The Cape with a two hour movie tonight at nine.  I'll give you my review after I've actually watched the thing, but I do have a couple of first impressions based on the ads and previews I've seen so far.
This seems to be an attempt on NBC's part to win back the audience of its previous comic book inspired hit Heroes. In fact, after tonight's premiere, the show will even be settling into Heroes' old Monday night time slot.  However, unlike Heroes, this new show looks to be a more traditional take on the urban vigilante sub-genre of superheroes, complete with such classic genre tropes as a costume and a secret identity.  Perhaps too traditional.  The previews so far aren't showing me anything that I, and probably ever other reader of super-hero comics, haven't seen before. In other words, The Cape appears to be a pretty standard issue Batman/Daredevil pastiche. It will have to distinguish itself by adding some extra dimension to the tried and true formula, but the ads aren't showing me any yet.
The biggest problem with this show is the title.
The Cape?
Are they serious?
That has got to be the most uninspired name for a superhero character since... well, since "Superman."  Plus, it's been used before.  I came across a comic book with the same name which appeared totally unrelated to this show as I was browsing the new releases at the Laughing Ogre comic shop on Wednesday.
I'll be watching when the show starts in a little over two and a half hours, and some or all, or none, of my preliminary opinions may change by 11 p.m.  I'll let you know in a day or so.
Posted by Ray "!!" Tomczak at 6:16 PM

Email ThisBlogThis!Share to TwitterShare to FacebookShare to Pinterest
Labels: only vaguely related to comics, super-hero, TV