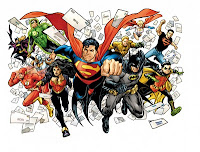 I've always loved reading comic book's letters columns.  When I'd buy a new comic, I often read the letters page before I read the story, even when there was a notice warning me not to.   One of the reasons I stopped buying Uncanny X-Men was that they only sporadically published a letters column.  Even now, when I buy old comics, I still read the letters first.
Not everyone, of course, shares my enthusiasm.  Take Warren Ellis, for example. He'd been answering the letters in Transmetropolitan when the Vertigo line dropped letters columns.  When he was doing a signing at local comics shop The Laughing Ogre not long after, I asked him how he felt about this development and his response was basically, "Good Riddance." To him, the banishing of letters columns indicated that the medium was "growing up."  After all, he reasoned, "real" books don't have pages of readers comments.  This was a sign of   comics finally taking themselves seriously as literature, according to Ellis.
I didn't say anything at the time, but there are a couple of flaws in that argument.  First, many paperback books do actually have pages and pages of comments from readers right up front. Of course, these are paid readers, what you and I would call "reviewers," and unlike comics letters columns, which occasionally ran negative letters, these comments contained only gushing praise.
Secondly, what we commonly call "comic books" aren't really books.  They're magazines, and "real" magazines like Time and Rolling Stone do, in fact, run several pages of comments from their readers in every issue.
Now, Warren Ellis may not be too happy about it, but I was quite pleased to read today that DC is going to be bringing back letters columns soon.
Michael Cavna, at the Washington Post's "Comic Riffs" blog sums up, much more eloquently than I ever could, why the return of the letters column is a good thing.
On the other hand, Brett Schenker at Graphic Policy makes the case that in the age of the Wild, Wild Web bringing back letters columns is a bad idea.
You already know where I stand on this, and I'm looking forward to you letting me know what you think in your comments.
Posted by Ray "!!" Tomczak at 8:17 PM

Email ThisBlogThis!Share to TwitterShare to FacebookShare to Pinterest
Labels: Around the Web, comic books, DC, news