Zonker Harris: Rebel With A New Cause

I spent a few minutes last night catching up on the last few weeks of Doonesbury over at Go Comics.com and I was somewhat taken aback by this panel from the December 26th strip: 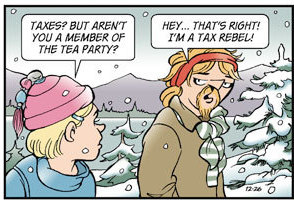 Waitaminnit!
The Tea Party? Really?
Are you telling me that Zonker Harris, aging hippie and retired tanning champion, who was once associated with a medical marijuana distributor, finds common cause with the extreme right wing of the Republican party?  That just seemed so far out of character for ol' Zonk.
Yet the more I thought about it, the more sense it made.  Zonker is an old hippie and a veteran of the Vietnam era protest movement.  Perhaps he sees something of the spirit of that era in the anti-tax protests of the Tea Partiers.
Also, I have heard representatives of various branches of the Tea Party taking pains to emphasize that theirs is a fiscal, not a social, conservative movement.  Thus, I suppose it would be possible for Zonker to share the Tea Party's views on taxes and the deficit and still not see eye to eye with certain of its members on much of anything else.
Of course, it is a testament to Garry Trudeau's skill as a writer that  over the past four decades he has made Zonker a real enough personality that I would care enough about him to even be thinking about all this.
Posted by Ray "!!" Tomczak at 5:35 PM