"When The Bugle Blows"--Sensational Spider-Man #147

Back in November, as I wrote my post about Amazing Spider-Man #147, I noticed that I had also, quite coincidentally, earlier spotlighted The Brave and the Bold #147 and Justice League of America #147.  Afterwards, I decided to do it on purpose from now on. So, today I begin an irregular feature wherein I shall read and review the 147th issue of one of the comparatively few comic book series  in the nearly eight decade history of the comics industry that have reached that number.  While thumbing through the back issues at Half-Price Books yesterday, I came upon a copy of The Spectacular Spider-Man #147, which seems as good a place as any to start. 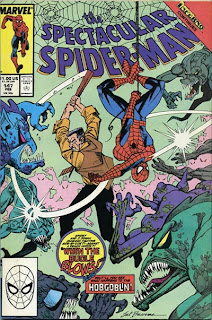 Like the corresponding number of its older sister series, SSM #147 was written by Gerry Conway.  That's about all the two stories have in common, however. In the intervening thirteen years, a lot had changed. Peter Parker had married his long-time, on-again/off-again girlfriend Mary Jane Watson, and his old friend Ned Leeds, long presumed to be the super-villain known as the Hobgoblin, had been killed by terrorists.
Oh, and demons had apparently overrun Manhattan Island.
This issue is part of the cross-over story line "Inferno."  Don't ask me what "Inferno" is about.  I can't tell you.  Other than this issue, I've read a couple issues of The Avengers that cross over with the story, but since it was primarily an X-Men event, these issues exist on the periphery of the story and don't really give the reader a sense of the big picture.  Kind of sucks for you if you're not reading the X books, I guess, which I wasn't at the time and am not inclined to do now. All I know is that for some reason there's a bunch of demons running around everywhere and attacking people.
Conway himself sums up the dilemma of the casual reader in a caption toward the end of the story:

"Only a few know what is happening, and only they can confront the evil at it's source.

"For the rest of those trapped on this unhappy isle, Inferno is a catastrophe without rhyme or reason."

He's referring to the inhabitants of Manhattan within the story, but those words also pretty much sum up how I felt while reading this story.

The story opens with the new Hobgoblin sulking away from a battle with Spider-Man and Harry Osborn, who had once again assumed the role of the Green Goblin.  You'll remember that at this time the original Green Goblin, Harry's father Norman Osborn, was "dead," though he eventually got better.  After a run-in with the demons,  the Hobgoblin gets the bright idea to go to the Empire State Building, which was apparently the center of the demon infestation, and see, N'Astirh, the head demon.  Once granted an audience with N'Astirh, Hobby offers the demon his soul in exchange for the power of a demon.  Amused, N'Astirh grants the Hobgoblin's request.  The issue ends with Hobgoblin gazing in horror at a reflection in a pond of his now demonic looking face.
Meanwhile, Spider-Man has an encounter of his own with a mysterious demonic wind that rises up out of nowhere and slams him against a wall.  Injured, the wall-crawler takes refuge in the offices of the Daily Bugle, only to find that its no safe haven, but rather under seige by a horde of demons.  As depicted on the cover, Spidey ends up fighting alongside his perennial nemesis J. Jonah Jameson against the demonic invaders.  Once the battle is over, Spider-Man collapses from his wounds.
For what it is, which is basically a footnote in someone else's story line, "When The Bugle Blows" is a pretty decent issue.  We get some nice characterization of Spider-Man and his friends, the beginnings of a major plot development, and plenty of demon-bashing action all nicely illustrated by the late, great Sal Buscema.
Posted by Ray "!!" Tomczak at 4:57 PM