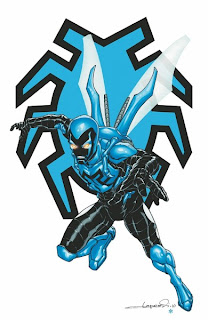 You may have noticed that I haven't written anything about Justice League: Generation Lost for a few weeks now.  The reason is not that I'm afraid of the negative comments that have greeted past reviews of the series.  Although, as I've said before, it seems as if I just can't win when reviewing this book.  Whether I love an issue or hate it, there's inevitably someone who vehemently and vociferously disagrees with my point of view.  Still, positive or negative, I welcome all comments.
No, the reason I haven't written about JL:GL recently is that I'm no longer reading it.  Which is not to say that I've stopped buying it.  I was beginning to get a little frustrated with the slow pace of the story from issue to issue, and considered dropping the book altogether.  However, I'm still holding out hope that the series will read much better as a completed work, and it was a bit late in the game to start waiting for the trade paperback collection.  So, I will be buying #18 today.  Then I'll throw it in a box for at least four months.
After I buy #26, I'll sit down and read, and hopefully enjoy, the whole thing over the course of a weekend.  I will, of course, give you my final thoughts on the story afterward.
Posted by Ray "!!" Tomczak at 3:11 PM