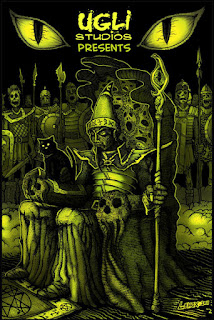 Submitting your self-published small press comic to a 'zine or website for review is always a tricky proposition.  You want the world to greet your brainchild with universal acclaim, but you know that's not always going to be the case.  I guess that I ultimately don't have the stomach for it. When I was actively publishing my own comics, I stopped sending out review copies after a  couple of write ups that weren't exactly glowing.  One of them even led to me eventually abandoning a particular comic book series altogether.
So, I was sensitive to the potential for offense and hurt feelings when I got a message through the Gutter Talk Facebook page from an artist named Jason Lenox asking me to review his initial self published effort.   At the same time, I was honored that anyone would seek out my opinion in that way.  Therefore, I feel that I owe it to Jason to respect the trust he's placed in me by giving my honest opinion, for good or ill.
The good news is that I don't hate Ugli Studios Presents #1. It's nothing that would have me tossing the book against the nearest wall if Jason had sent me a physical copy rather than a PDF file. However, neither can I say that I loved it, or even really liked it all that strongly, either.
The thirty page comic consists of two separate sci-fi/fantasy short stories written by Lenox and David Paul and illustrated by Lenox as well as selection of pin-ups from various guest artists.  Jason's art in both stories is quite nice.  He has a good sense of design and storytelling and can draw a mean looking monster or alien as well as some pretty nice looking human beings.  The coloring job by Dani Kaulakis is particularly effective.  I hope that the actual book is printed on paper stock of sufficient quality to show it off to its full effect.  Kaulakis can also draw pretty well, as one of the pin-ups demonstrates.
On the other hand, the stories themselves don't quite work for me.  In each case, Lenox and Paul seem to be going for a Twilight Zone/Outer Limits--or maybe EC Comics would be a better comparison--style twist ending, but in neither instance do they quite pull it off.

The lead story, "Through The Eyes of Griselda," takes place in the mythical realm of Xendria, an ancient kingdom under the thumb of an evil sorcerer, and tells of an uprising against the wizard's oppressive rule as told from the perspective of his familiar, a cat named Griselda.  Unfortunately, the attempted twist is telegraphed in the art several pages before the actual revelation.

The second tale, "The Great Vermin," tells the story of an interstellar expeditionary force sent to a devastated planet to exterminate the last remnants of a vicious predator species.  Lenox and Paul pull off the twist ending a little better here, but I can't say that I was exactly shocked by it.  The big reveal left me with a strong feeling of having seen it before and done much better.  In fact, the final panel reminded me very much of a story called brief encounter from the fifth issue of a short lived science fiction anthology from DC Comics back in the early 80's called Time Warp.  The tone of that story, however, wasn't quite as grim as Lenox and Paul's.
Overrall, though, Ugli Studios Presents #1 is a good first effort.  There's definitely potential for improvement, but I certainly seeing more from these creators.
Ugli Studios Presents #1 can be purchased for $5.00 at Jason Lenox's web-site.
Posted by Ray "!!" Tomczak at 4:35 PM