The latest minor comic related controversy on the Wild, Wild Web, as I discovered from reading the Robot 6 blog at Comic Book Resources, involves Tom Batiuk, creator of Funky Winkerbean, and his lawyers taking on a site devoted to commenting on and critiquing the strip.  Blog hosting service Wordpress received a letter from Batiuk's legal representatives demanding that they take down two sites, Stuck Funky and Son of Stuck Funky, which had been re-posting the strips with original commentary.  The original Stuck Funky was no longer being updated, and Son of had stepped up  to continue its work. 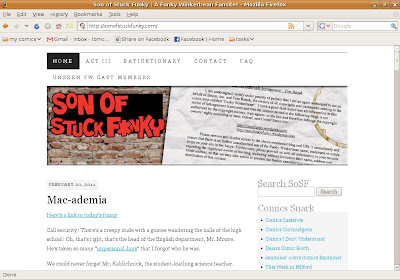 Batiuk, in a response to a query from the Daily Cartoonist web-site, insists that he was merely acting to preserve his copyright and trademark protection.  Predictably, there are some who suspect that he was motivated more by a desire to shut down a particularly vocal critic.
Of course, if Batiuk were just trying to shut the guy up, he probably wouldn't come out and say so.  Still, there's no reason to doubt Batiuk's account of his motives.  It all depends, as I see it, on what, if anything, happens next.   Son of Stuck Funky has resurfaced with its own domain name and a slight change in format.  Rather than re-posting the strip, which is what Batiuk was ostensibly objecting to, the posts now link to the strip at a site authorized to carry it.  That really should end the matter.  If Batiuk is, indeed, simply concerned with protecting his legal rights and not in censoring his critics, I suspect it will and no more about this matter will be heard.  Even if he were more interested in just shutting this blogger up, he must realize that taking any further action would only generate more publicity, the majority of which would surely be negative.  In fact, as one Daily Cartoonist commenter noted, this whole incident has mostly served to bring attention to Son of Stuck Funky.  The truth of which is attested to by the fact that I'm even writing this post.
All of this has got me thinking.  I've been trying to come up with ways to attract more readers to this blog.  Maybe I should start a feud with Scott Adams.
Posted by Ray "!!" Tomczak at 11:17 AM

Email ThisBlogThis!Share to TwitterShare to FacebookShare to Pinterest
Labels: Around the Web, artists, comic strips, news