As promised on Friday, I am back with the answer to the latest Gutter Talk Trivia Challenge.  You may remember that I asked you if you could name the first co-publishing venture between Marvel and DC Comics, noting that it was not, as you might have believed, Superman vs. The Amazing Spider-Man, though that was, indeed, the first meeting of any of the two companies' super-heroes.
Now, without further ado, the answer is (drumroll please, Maestro.):

MGM's Marvelous Wizard of Oz
(Published in 1975--A year prior to Superman vs. The Amazing Spider-Man) 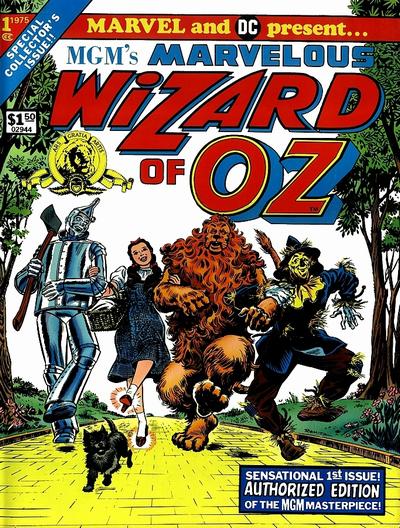 And now, also as promised, the not all that secret origin of this historic comic book...
Through sheer coincidence, in 1975 both DC and Marvel had a Wizard of Oz comic in the works.  Marvel was planning an adaptation of L. Frank Baum's novel, while DC had acquired the rights from MGM to adapt the 1939 movie.  Upon learning of DC's project, Stan Lee approached DC publisher Carmine Infantino with the idea that the two companies pool their efforts and jointly put out one book.  What eventually saw print was an adaptation of the film produced by writer Roy Thomas and artist John Buscema, the team which had been set to do Marvel's comic based on the book.
The legend about this book, confirmed by Roy Thomas in an essay in the book Stan's Soapbox: The Collection, is that Buscema laid out the book entirely from memory, without a plot from Thomas, even though he hadn't seen the film for many years.  Thomas claims that when he got the pages back only one or two small scenes where out of place.
Now on to the "bonus question":  What is the word that means, as defined by Wiktionary, "A form of error arising from mishearing a spoken or sung phrase" (though I've actually only ever heard it used to refer to misheard song lyrics)?
The word is "mondegreen."  I love the word precisely because it's so obscure and I'm really the only person I actually know who's ever heard of it.
If you're wondering how I could hear "new wastes of winter" as "new age of friendship," just listen to the song.  Ian Anderson doesn't exactly enunciate all that clearly.  Besides, either phrase really makes just as much sense in the context of the song, which is to say not very bloody much at all. I mean, "Titanic breaking children lost in melting crystal tears."  What the hell is that supposed to mean?
Actually, if I were going to propose a serious theory, I would suppose that my brain, being unable to interpret Anderson's mumbling, filled in a phrase that fit the song's rhythm and seemed to make sense.  At least as much sense as Progressive Rock lyrics ever make, anyway. For example, is there anybody who can really tell me what "Roundabout" by Yes is supposed to be about?
Honestly, though, however nonsensical "Something's On The Move" may be, I still love it.  It was the first Jethro Tull song I ever heard (or, more appropriately, misheard) and thus my introduction to a truly great band.
Posted by Ray "!!" Tomczak at 2:12 PM