Last year, on Super Bowl Sunday, I wrote about Superman #326, and today I officially make "Super Sunday", wherein I talk about an old Superman comic on the day that the rest of the country is obsessed with a football game, an annual tradition as I tell you all about Superman #330. 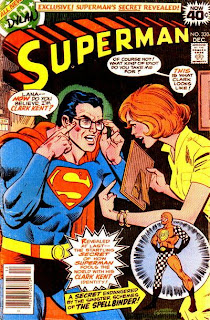 As I said in that earlier post, Martin Pasko is one of my favorite writers and has written some classic Superman tales.  "The Master Mesmerizer of Metropolis," however, is not one of them.  It's not so much that the story is bad, although it's certainly not good by any measure, but that it's utterly ridiculous and, most of all, totally unnecessary.
Comics fans, as you know, are an odd bunch.  They--ok, we--can easily accept that a man can fly faster than the speed of light, see through walls, shoot heat beams out of his eyes and push planets with his pinky.  On the other hand, the idea that when that same man changes his clothes and slaps on a pair of glasses no one can recognize him gives us--well, some of us, at least--trouble.  Now, as far as I'm concerned, the answer is simply, "Hey, it's a comic book!" If you're willing to suspend disbelief enough to buy the idea of super-heroes in the first place, then Superman's lame "disguise" really shouldn't be all that hard to swallow.
Apparently that wasn't enough for Al Schroeder III, a fan from Nashville, Tennessee who submitted an idea to DC for a story to explain away this "problem" which Pasko turned into the story in Superman #330.
Superman encounters a villain named the Spellbinder, who is able to hypnotize people into committing crimes.  To counter this scheme, Superman himself hypnotizes entire city of Metropolis via a giant flying TV screen to make them immune to hypnosis.  With me so far?
So, minutes later, Superman's in a storeroom at the Galaxy building changing back to Clark when Lana Lang walks in.  Despite seeing it with her own eyes, she refuses to believe that Superman is Clark Kent.  Later, Superman asks a Daily Planet artist named Ernie to draw Superman and Clark Kent.  Ernie's drawing of Kent looks thin, frail and, as Superman admits, "...not terribly handsome."  Superman now realizes that, with the aid of the lenses of his glasses; which are made of indestructible Kryptonian plexiglass from the rocket he came to Earth in as a baby; he has been unconsciously his power of super hypnosis to hypnotize everyone who looks at him as Clark Kent into seeing Kent as a wimp.  Apparently the hypnotic effect works through TV cameras and affects people who see still photos of Clark and lingers for a while so that people still see Clark as a wuss even if Superman temporarily loses his powers.   You got all that?  So, when Superman made the people of Metropolis immune to hypnosis, he unknowingly canceled his own unconscious Svengali routine.  Thus Lana saw not Clark Kent, but Superman in a blue suit and glasses.
I've often maintained that the entire super-hero conceit is built on a pretty flimsy foundation and tends to crumble if you think about it too hard.  "The Master Mesmerizer of Metropolis" is a textbook example of that theorem.