Gutter Talk Trivia Challenge 2: To Celebrate The Dawning of the New Wastes of Winter

It's been a while since we've done one of these trivia quizzes, and while I'm sure you haven't exactly missed it or been clamoring for another, I'm going ahead and serving up another one anyway. 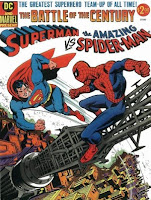 Just about everyone knows that Superman vs. The Amazing Spider-Man, published in 1976, was the first ever meeting of super-heroes from the two largest comics publishers, DC and Marvel.  It was not, however, the two companies' first co-publication.  So, what was, then?
I'll let you think on that over the weekend, and I'll be back on Monday with the answer and the story behind that historic first co-publishing venture.

Now for an explanation of the title of this post.  For over thirty years, from the time I first heard Jethro Tull's song "Something's On The Move," I  was sure that the third line in the first verse was "To celebrate the dawning of the new age of friendship."  That line seemed to be perfectly fit the subject of this post, so I decided to use it as the title.  Then I went and looked up the lyrics for "Something's On The Move" on-line.  Well, it turns out I'd been wrong for three decades.  The line is, in fact, "To celebrate the dawning of the new wastes of winter." I couldn't use that line for my post title.  It wouldn't make any sense.  However, I couldn't think of anything else.  So, I went with it regardless and "sense" be damned.
I'd initially planned to include a "bonus question" asking you to name the song I took this post's title from. But I just told you that and the story behind it.  However, that story suggested another "bonus question."
There is a word for, as Wiktionary defines it, "A form of error arising from mishearing a spoken or sung phrase."  Do you know what it is?
I do, and I'll tell you on Monday.
Posted by Ray "!!" Tomczak at 2:34 PM