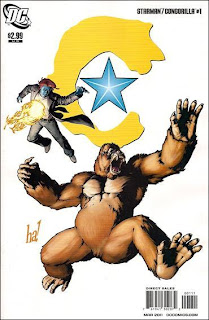 This comic came out last month, so I guess I'm a little late in writing about it, but I put off reading it for awhile.  I was a little afraid that I wasn't going to like it.  Now, if you knew me at all, you'd think that a comic starring an obscure Bronze Age character and a gorilla would be tailor made for me.  However, this particular comic has close ties to the current run of Justice League of America, a comic that I'm not reading, and Justice League: Cry For Justice, a comic that, based on the reviews I've read, you couldn't pay me to read.  I've seen that series compared to Identity Crisis, with many people actually saying that Cry is worse. On the other hand, even though Starman/Congorilla writer James Robinson is the same man responsible for Cry For Justice, he is also the author of the excellent Starman series from the 1990's and this one-shot features one of that series' major supporting characters.  In short, I really didn't know what to expect from this comic, but I was leaning slightly toward pessimism. Starman, after all, ended a decade ago and the ink is barely dry on Cry For Justice.
Fortunately for all concerned, "Now and Then", the story in Starman/Congorilla #1, turns out to be a pretty decently entertaining comic.  The story concerns the efforts of the eponymous heroes, together with Animal Man and Rex the Wonder Dog, to find a Congorilla's friend,  a super-intelligent gorilla scientist named Malavar, so that Malavar can use his knowledge of other dimensions in order to free the Justice League from a giant force dome which has mysteriously appeared over Washington D.C., trapping the League and a good chunk of the city citizenry inside.  That sounds a bit complicated, but "Now and Then" really boils down to a small group of heroes fighting off an army of terrorist gorillas.
As I mentioned above, there is a lot of back story behind this issue, leading to the story being heavy on expository dialogue.  However, that's a lot better than Robinson just assuming we've read all the relevant past comics and throwing us into the action without any explanation and leaving us totally bewildered.  With all the  exposition and the way the story shifts back and forth in time between the fight with the gorilla terrorists and the events leading up to it, the story had the potential to be a confusing mess.  Fortunately, however, thanks to the clear and conscise stoytelling skills of  Robinson and artist Brett Booth, this doesn't happen.  The story breezes along at a brisk pace and Robinson manages to make most of the expository dialogue sound perfectly natural.
In the way that this story manages to be part of the larger story of the DC Universe yet accessible to a casual reader, as well as its generally lighthearted tone and high concept, psuedo-science fiction premise, Starman/Congorilla reminds me a little of comics of the Bronze Age.
Posted by Ray "!!" Tomczak at 3:04 PM