It's about time for another one of those posts where I take a look at the 147th issue of a long running comic series.  Check out this earlier post for a full explanation of this madness. Today's example is from a series that barely made it to #147, The Defenders, which ended with #152.
One caveat before we proceed: While The Defenders has become one of the most fondly remembered titles and teams from Marvel's Bronze Age, this issue does not feature any of the "classic" Defenders line-up of Dr. Strange,  the Hulk, the Sub-Mariner or the Silver Surfer.  These are the characters most associated with the team and the ones who have been gathered together for subsequent reunions of the group.  The issue we're considering today, however, features the "New Defenders", a team consisting of three ex-X-men, the Beast, the Angel and Iceman, and several obscure fourth string characters such as the Gargoyle and the Valkyrie, most of whom got killed off in the final issue. 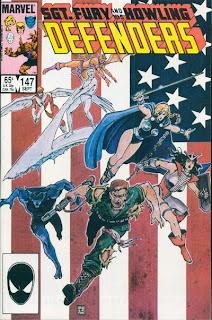 The first thing you notice about this issue is, of course, the cover.  It's actually a pretty cool cover with a slightly altered logo and a painted image of a World War II era Sgt. Nick Fury leading the team as they charge into battle against a background of a giant American flag.  It's the kind of cover that makes you want to open up the book and see what's on the inside.  If you do that, however, you'll almost instantly regret it.
This is a truly awful comic.  It fails on every level from writing to art, and it didn't even have a letters page.  To be fair, the lettering and coloring are decent. The story, bad as it is, is at least legible.
"...and Games" is actually an appropriate title for the story, since it contains no fun whatsoever.   (Actually, "Fun..." was the title of the first part of the story in the previous issue, though I doubt that issue was much fun, either.)
As to the story itself, I really can't tell you what's going on in this issue.  The Defenders, consisting mostly of a bunch of characters I don't know and aren't adequately identified or even differentiated from one another, are in Central Park fighting some villain with the silly name of Hotspur, whose evil plan isn't quite made clear, though apparently it involves mind controlling innocent civialians.  Of course, I have not read the previous issue, but I doubt that the story would make any sense even if I had.  The storytelling, both in the writing and the awful, amateurish art, is muddy and confused and the dialogue is simply awful. By the way, the people credited with creating this mess are writer Peter B. Gillis and artists Don Perlin and Art Nichols, and editor Carl Potts probably deserves a share of the blame as well.
If this issue was typical of The Defenders back in 1985, then its no wonder it was cancelled a mere five months later.
Posted by Ray "!!" Tomczak at 2:39 PM