Tales of The Uncollected

Graphic novels and trade paperback collections have been an important part of the publishing strategies of every major comics publisher for about a decade and a half now.  Storylines in ongoing comics end up in trade paperback form almost as soon as the last chapter hits the shops.  Meanwhile, publishers increasingly turn to the nearly endless supply of older material from the eight decade history of the comics industry in order to fill comic shop and book store shelves.  Even comics that are perhaps best forgotten have been dredged up and spiffed up and re-presented in trade paperback form.  Gold Key's adaptation of the original Star Trek series was, to put it mildly, awful, especially the early issues.  Yet those horrors have been lovingly restored and reprinted in a series of TPBs from publisher Checker Books. 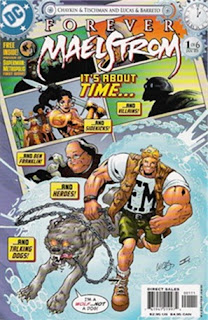 Nonetheless, despite the way it may appear, the inevitable trade paperback collection is not inevitable in all cases.  Back in 1993, Malibu Comics announced the forthcoming release of a mini-series entitled The Life and Times of Forever Maelstrom through its creator owned Bravura line. It was to be Howard Chaykin's follow-up to his earlier Bravura series Power & Glory.  Before it could be published, Malibu was bought up by Marvel, who, as I understand it, wanted the company not for its intellectual properties but for its patented coloring process, and the Bravura line came to an end.
We now flash forward a decade to 2003.  Forever Maelstrom finally sees print as a six issues mini-series from DC, where Chaykin was working at the time on various projects that included American Century and Barnum.  When I saw the first issue at a comics shop, I left it sitting there on the shelf.  After all, I figured, there'd be a trade collection and I'd buy that.  I'd waited ten years to read that story, I reasoned, I could wait another six months.  It's seven years later, and I still have yet to read Forever Maelstrom.  The "inevitable" trade paperback failed to materialize.
The news from Vertigo last month that Grant Morrison and Frank Quitely's  Flex Mentallo mini-series will finally be reprinted this fall after languishing for fifteen years in reprint limbo has got me thinking about other deserving comics series or storylines that have never been collected or reprinted.  Many of these, I'll be writing about at length in future posts.
One that I've already written about is J.M. DeMatteis' Dr. Fate.  This is one of his best works, yet has not gotten the recognition it deserves from most fans.  Speaking of DeMatteis, the first five issues of Seekers Into The Mystery have been collected, but there remain ten issues of this unfortunately short-lived series that you'll have to hunt through back issue bins to read.
Of course, I really enjoy spending countless hours pawing through back issue bins and bargain boxes searching for the one or two elusive issues that will complete my collection of a given title.  For me, the hunt is part of the fun of reading and collecting comics.  To put in Zen terms, the journey is the destination.  I realize that not everyone, however, may share that philosophy. A lot of people just want to read the story without all the bother of  tracking it down.  They deserve to read these great stories that have yet to be reprinted and, as things stand now, they are unfortunately missing out.
It also struck me that as central to the DC Universe as Kobra has been over the past three decades, it seems that his earliest appearances should be collected.  I envision a Showcase Presents volume encompassing all his Bronze Age appearances from Kobra #1 up to Batman and the Outsiders #28, including his encounter with Ambush Bug in DC Comics Presents #81.
Among the comics I plan to write about in the future are the DC comics work of writer John Ostrander, of which less than a handful have been reprinted.  The first of those posts will appear tomorrow and deal with Hawkworld.
I'd like your input as well, readers.  What series that have yet to be collected do you feel are deserving of that honor, and why?  I'm looking forward to reading your comments.