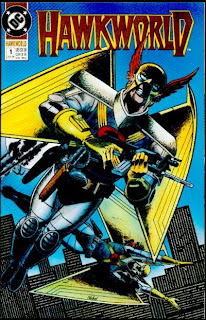 I have long lamented the fact that much of John Ostrander's work for DC is currently out of print, including the two finest works of his career, Spectre and Hawkworld.  I'll get to Spectre another time. Today, I'm going to focus on Hawkworld and why it deserves to be reprinted.
The Hawkworld ongoing series followed a three issue mini-series by Tim Truman, which, by the way, has been collected in a trade paperback. The monthly book was written by Ostrander, with Truman co-writing the first nine issues, wrapping up the loose ends from the mini-series.  After Truman departed, Ostrander was really able to cut loose and make the series his own, producing some of his finest work up to that point in time.
Graham Nolan drew most of the first 25 issues, except for #13, drawn by Tom Mandrake, and #20, which was drawn by Gary Kwapisz.  Jan Duursema drew issues #27-29, and Truman returned to illustrate the final three issues of the series. 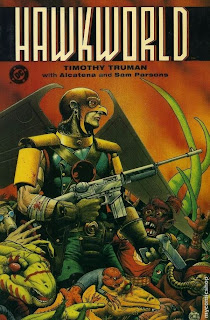 Mike Gold was the series' initial editor, with Archie Goodwin replacing him as of  #26.  When Goodwin took over, the series, which had leaned more toward hard science fiction than straight super-hero stories, began to move toward a more traditionally super-heroic approach.  The final storyline, while still quite good, doesn't really live up to standards set during the book's first two years.
The monthly Hawkworld series was essentially the story of citizens of a repressive, totalitarian world encountering and reacting to American society and the ideas and ideals upon which this country was founded and claims to be guided by.  Following the events of the mini-series, Katar Hol, a "wingman" in the police force of the planet Thanagar, is named Thanagar's Greatest Hero for exposing his mentor B'yth, the previous holder of that title, as a criminal.  He and his partner Shayera Thal are sent on what is ostensibly  a diplomatic mission to the planet Earth, which has opened up a Thanagarian embassy in the wake of the Invasion crossover event.  Hol's real purpose in accepting the assignment to Earth, however, is to find and capture B'yth, who escaped and fled here.  The pair land in the American city of Chicago, where Shayera works with a pair of local police officers to "study Earth police methods", in the process falling in love with one of them.  Katar, meanwhile, works with a Chicago museum planning an exhibition of Thanagarian artifacts while continuing his search for B'yth.
Although a case could be made that the pre-Crisis On Infinite Earths Hawkman's home of Midway City was analogous to Chicago, it seems the real reason Hawkworld was set in Chicago is the same reason so many other comics are set in New York City.  Chicago is where John Ostrander lives.  As a Chicago resident, he was able to bring a real sense of the essence of the city to his stories. 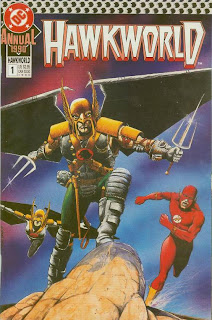 Hawkworld was a comic book that deserved to be controversial, and it was, but for all the wrong reasons.  This revamped version of Hawkman was introduced into the current DC Universe of 1990 as a new character, thus effectively invalidating all previous appearances of the Silver Age version of the character going all the way back to  The Brave and the Bold #34.  This pissed a lot of people off, and they just didn't care how good the current stories were but, rather, how much they screwed up their precious continuity. There were, of course, a few continuity questions to be answered,  as there always are when a character is revamped.  The major ones were "If Hawkman just came to Earth now, who was the guy in the old Justice League of America?" and "If that was the Golden Age Hawkman in the JLA, as the first annual says, then who was in the Justice League International while he was trapped in Limbo endlessly reliving the Norse legend of Ragnarok, as shown in The Last Days of the Justice Society of America?"
For my part, I didn't much care about the continuity issues.  I've always favored good storytelling over rigid adherence to continuity.  Besides, Ostrander neatly answered all the continuity questions to my satisfaction over the course of the series.
Frankly, I'd never really been all that impressed with Hawkman prior to Hawkworld, anyway.  The few stories I'd read had been, at best, bland.  Ostrander was telling the best Hawkman stories ever, and if he had to toss out thirty years of forgettable stories to do so, then so be it.
Unfortunately, the flap over continuity pretty much crowded out discussion in the letters pages of the provocative ideas Ostrander was presenting in Hawkworld.  That's the real reason I say that this series truly deserved to be controversial.  This is one of the few comic books that not only made think, but made me question my assumptions and look at things in a new way.
When Katar first reads the U.S. Constitution and the Declaration of Independence in #3, he asks of his human companions, "Do your people have any idea of what they are really saying here? How dangerous this document is?"
I, for one, did not, at least not until I read Hawkworld.  I'd honestly never really thought about it, instead taking the freedoms that Americans enjoy by virtue of these founding documents for granted.  It took a comic book to make me seriously consider for the first time what the words of those documents and the principles upon which the United States of America was founded truly mean. 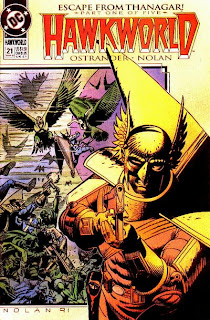 If that weren't enough, Ostrander managed to convey these dangerous ideas within the framework of an exciting and action packed science fiction/super-hero tale.  That's harder than it looks.  Many writers, such as Dennis O'Neil in Green Lantern/Green Arrow, have attempted it, but none have pulled it off as effectively as Ostrander does here.  Even more amazing  is that he managed to do it again in Spectre.
I have a theory as to why Hawkworld has gone unreprinted.  DC has made a royal mess out of Hawkman over the past couple of decades.  While not all of that can laid at the feet of Hawkworld, the roots do lie in that series.  I think DC just wants to pretend the whole thing never happened.  Sadly, in doing so, they are also forgetting some of the best stories they've ever published.
Posted by Ray "!!" Tomczak at 2:40 PM